Tribeca Resources Chile SpA (“Tribeca Resources”) has completed its first investment, taking a majority stake in the Caballo Blanco copper exploration project in Chile. Tribeca Resources will hold an initial 62.5% equity interest in the project and can increase this by meeting certain development and funding milestones.

The Caballo Blanco project is located in the prolific Chilean Coastal Iron Oxide Copper-Gold (IOCG) Belt, approximately 40 km north of the city of La Serena in the Coquimbo province of Chile. The project consists of 1,878 hectares of mining tenements. Historical drilling totalling 1,979 metres has intersected a strong multi-kilometre scale IOCG alteration system, with copper and iron mineralisation near surface. Intersections to date include:

*  The intersection angle of the drill holes and the mineralised bodies is currently poorly constrained, with the true thickness of the mineralisation unknown.

In parallel with assessing funding options to further drill the Caballo Blanco project, Tribeca Resources will seek to add additional exploration projects to its portfolio. The initial focus will be on the Chilean Coastal IOCG Belt, where Tribeca Resources believes it is well placed to assemble a portfolio of copper dominant properties that can be advanced towards code compliant resources.

The Caballo Blanco project is 100% owned by the private Chilean company Bluerock Resources SpA (“Bluerock”) the vehicle into which Tribeca Resources has made its initial investment. Tribeca Resources is partnering with the current owners who will retain a significant minority equity interest and have on-going technical, strategic and administrative involvement, following this investment.

The team behind Tribeca Resources came out of Glencore’s copper business and established Tribeca Resources with the objective of building a portfolio of mid to late stage base metals and gold exploration projects in Latin America.

Figure 1: Location of the Caballo Blanco project and other selected IOCG, manto, and porphyry copper mines and projects in northern Chile 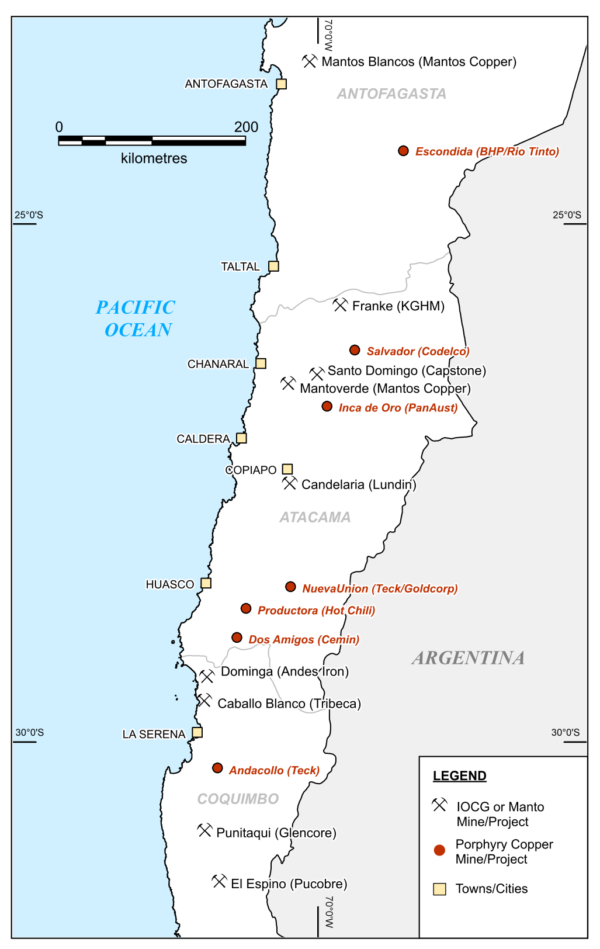 The information in this release is based on information reviewed by Dr. Paul Gow, Executive Director of Tribeca Resources Chile. Dr. Gow is a Member of the Australasian Institute of Mining and Metallurgy (AusIMM) and the Australian Institute of Geoscientists (AIG), and has sufficient experience which is relevant to the style of mineralisation and type of deposit under consideration and to the activity which he is undertaking to qualify as a Competent Person under the 2012 Edition of the Australasian Code for reporting of Exploration Results, Mineral Resources and Ore Reserves.