The Caballo Blanco property is in the Chilean Coastal IOCG Belt, approximately 40km north of the city of La Serena in Coquimbo province, and represents a mid- stage copper-iron-gold-cobalt exploration project, with significant drill intersections to date. Combined with available geophysical datasets (IP and ground magnetic), these intersections indicate the presence of a large well-mineralised kilometre-scale IOCG system. The most promising intersections to date are from the Chirsposo target as follows:

Tribeca’s immediate focus is on delineation of higher grade zones within the mineralised system such that code-compliant (JORC or NI43-101) mineral resources, potentially both oxide and sulphide, can be estimated.

The property comprises 1,876 hectares of mineral licences, which are 100%-owned by Tribeca’s majority-owned Chilean subsidiary, Bluerock SpA.Bluerock is 62.5% by Tribeca Resources and 37.5% by a group of private investors.

The property is in the La Higuera district in the southern portion of the Chilean Coastal IOCG Belt. The belt is centred on the Coastal Cordillera range, which is comprised of Late Jurassic and Cretaceous age volcano-sedimentary and intrusive rocks. The north-south belt is considered as a linear array of Mesozoic backarc continental margin rift basins (Sillitoe, 2003). The belt is typically considered to extend from latitude 31°S to 22° south and IOCG deposits within the belt are typically  interpreted as controlled by the arc-parallel regional Atacama fault system (Chen et al., 2013).

The IOCG mineralisation in the belt is broadly contemporaneous with manto-style deposits, as well as magnetite-dominated iron-rich copper-poor deposits. Key examples of the Chilean IOCG and allied deposits (and their published mineral resources) are: 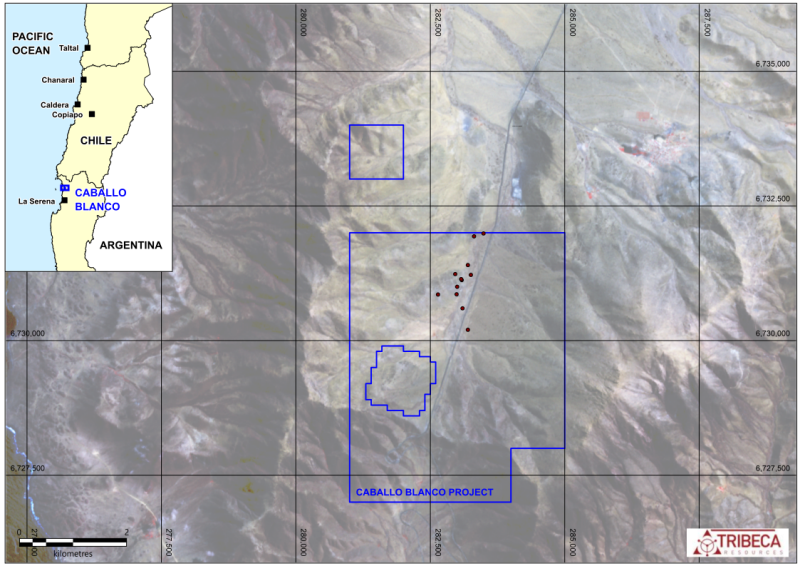 The Caballo Blanco property comprises 18 mineral licences for 1,876h hectares. All but one of the licences are exploitation licences.

Latin American Copper (LAC) completed the first significant work program in the area in 2000. It completed mapping and trenching over outcropping northeast-trending structures and small workings (Figure 2a), with the consequent interpretation that the area hosts a set of tension gashes between two segments of the Atacama Fault Zone, which host actinolite-magnetite-hematite alteration and associated copper oxides. This mapping formed the basis for drill targeting by LAC, who subsequently tested two target zones (Chirsposo and Molle) with shallow RC drilling of 1272m in 10 holes. The LAC drilling confirmed the presence of low to moderate grade copper mineralisation over 500m strike length along the northeast Chirsposo trend, and over a significant width of up to 200-300m. The best drill result ) was encountered in a hole stepped out 200m under shallow (25m thick) gravel cover (82m @ 0.35% Cu, 19.2% Fe and 576ppm Co from 64m to EOH in hole CAB0006).

Table 1: Selected drill intersections from historical drilling at Caballo Blanco. * The intersection angle of the drill holes and the mineralised bodies is currently poorly constrained but estimated at approximately 60° for the CAB holes and 30° for the vertical hole CB-01. **Only high detection limit (<2ppm) gold analyses were undertaken during the historic RC drilling (CAB0002 & CAB0006), with all samples below detection limit.

Azul Ventures optioned the project in 2012 and completed additional ground magnetic surveying, but no drilling was completed. Work was halted on the project from 2013, until 2017 when Tribeca completed the acquisition of an interest in Bluerock and commenced field activities comprising broader surface geochemical sampling.

The property area is located in the Los Choros Altos valley, which hosts significant infrastructure as it represents the key coastal valley utilised for north-south transport in Chile. The Pan-American Highway (Ruta 5) traverses the area, and the valley hosts several transmission lines, including 110kV and 220kV lines. (Figure 2b).

Figure 2: Photos from the Caballo Blanco area. a) Small copper oxide workings in outcrop near hole CB-01. b) View to the north along the Los Choros Altos valley that hosts the Caballo Blanco project. The Ruta 5 highway and several powerlines traverse this valley.

The rocks in the project area are dominated by Jurassic-Cretaceous diorite and andesite, with thin NW-trending felsic dykes, but also minor mafic dykes present. Petrological descriptions from drill core indicate the presence of porphyritic diorite and coarse-grained gabbro. An alluvial/gravel cover sequence laps onto the exposed rocks, with drilling indicating a cover thickness of approximately 0-30m.

The host rocks are interpreted by Sernageomin in the 1:100,000-scale mapping as the Jurassic Agua Salada Subvolcanic Complex. The north-south trending Atacama Fault Zone bisects the area, with cataclastic breccias mapped in the field by Sernageomin probably representing one of the discrete structures.

Amphibole-magnetite alteration is common and is most strongly developed in the eastern Chirsposo zone, where it disappears under the gravel cover to the northeast. There is a strong correlation between northeast-trending amphibole alteration zones, historic workings, and copper intersected in drilling. 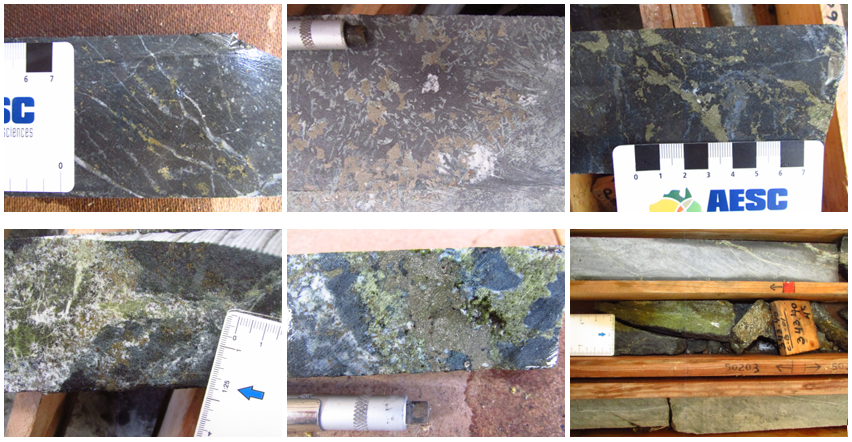 On the drill hole scale there is a strong correlation between copper, iron and gold mineralisation, and also between iron and cobalt (Figure 4). 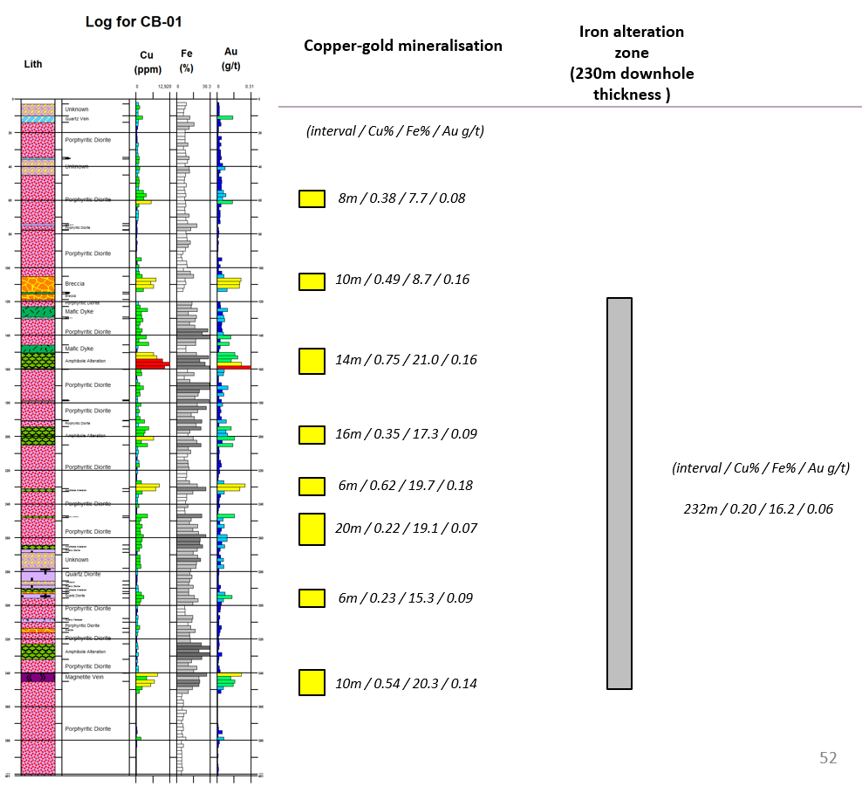 Soil geochemical sampling (-80# fraction) has been undertaken over the Chirsposo zone where outcrop, sub-crop or residual soil is present. The zone is represented by a 1000m x 400m area of +200ppm copper in soil anomalism, peaking at 1200ppm copper at the eastern end where the gravel cover encroaches. The copper anomalism in soils is accompanied by anomalous Co-Fe-Mo-Ni-P-Va. No gold assays were undertaken on the soil samples but results from drilling suggest gold should also be anomalous.

The copper in soil anomaly is shown in Figure 5, along with the mineralised lens intersected by four drill holes with copper-iron-cobalt grade increasing and open to the northeast. 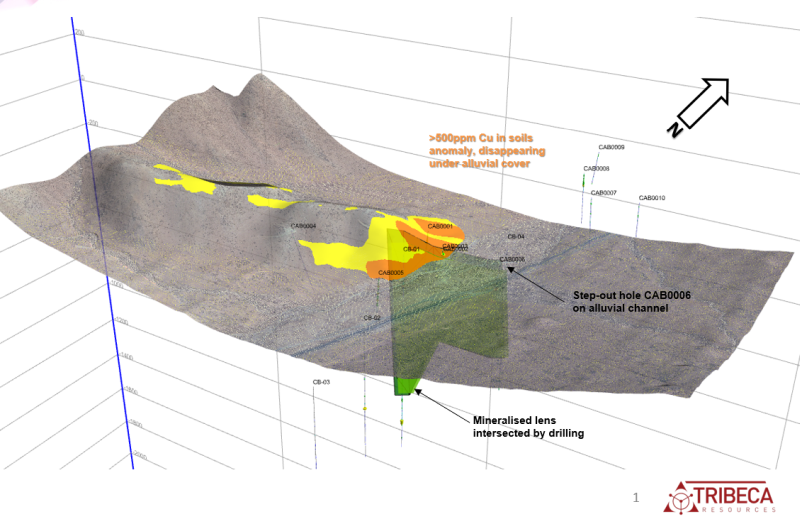 Figure 5: Location of the zones of +200ppm Cu (yellow) and +500ppm Cu (orange) soil anomalism at Chirsposo. The highest soil values are present as the outcrop disappears under thin gravel cover towards the northeast. Hole CAB0006 is a 200m step-out hole onto the gravel-covered valley and returned the best copper assay results (82m @ 0.35% copper, 19.2% Fe and 576ppm Co). The lens is open along strike from this intersection.

Numerous coincident high chargeability-magnetic targets remain to be tested. Tribeca has planned a drill program to test for extensions to the Chirsposo zone, particularly where is disappears under gravel cover, as well as test additional targets elsewhere within the project area. 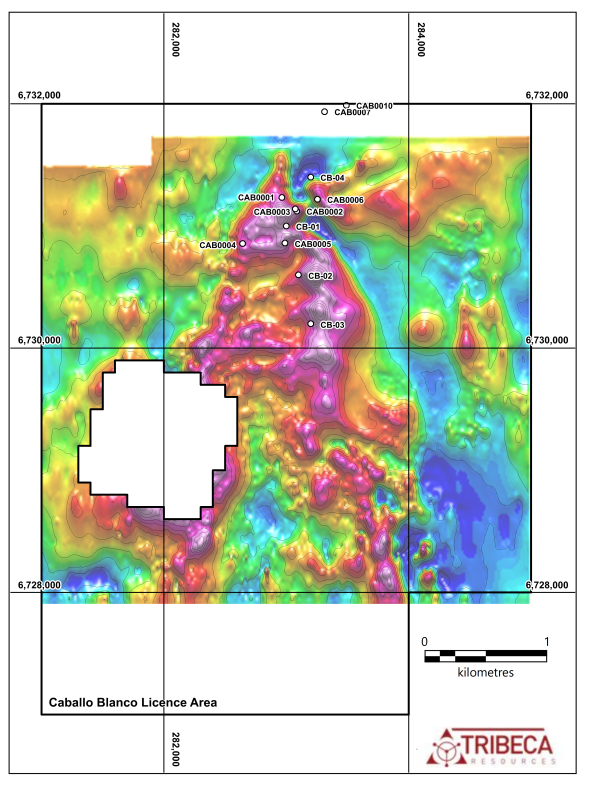 Figure 6: Image of the Reduced-to-Pole (RTP) ground magnetic data from the Caballo Blanco project. The key anomalous zone of interest is in the northern central zone where drilling has intersected strong copper mineralisation. The magnetic field contours are at a 500nT spacing.

Two phases of drilling were undertaken at the project as follows:

Three of these holes were drilled on tenure no longer part of the project, such that the current licences host 12 historic drill holes for 2,129m.

The locations of the drill holes are shown on Figure 6.

The drilling at Chirsposo has outlined a steeply southeast-dipping tabular mineralised body of approximately 50m thickness. Drill data combined with the 3D inversion of the ground magnetic data indicates the copper, iron and cobalt grades are improving along strike to the northeast, along with a zonation in the iron oxide mineralogy from magnetite to hematite (Figure 7). The cover thickness in the easternmost hole (CAB0006) was 25m, and the eastern extensions of this zone constitute a prime drill target.

Additional drilling to the south and north of the central lens indicates the presence of additional footwall and hangingwall lenses (e.g. CAB0001 in the footwall lens intersected 78m @ 0.22% Cu, 14.2% Fe, 205ppm Co from 10m). 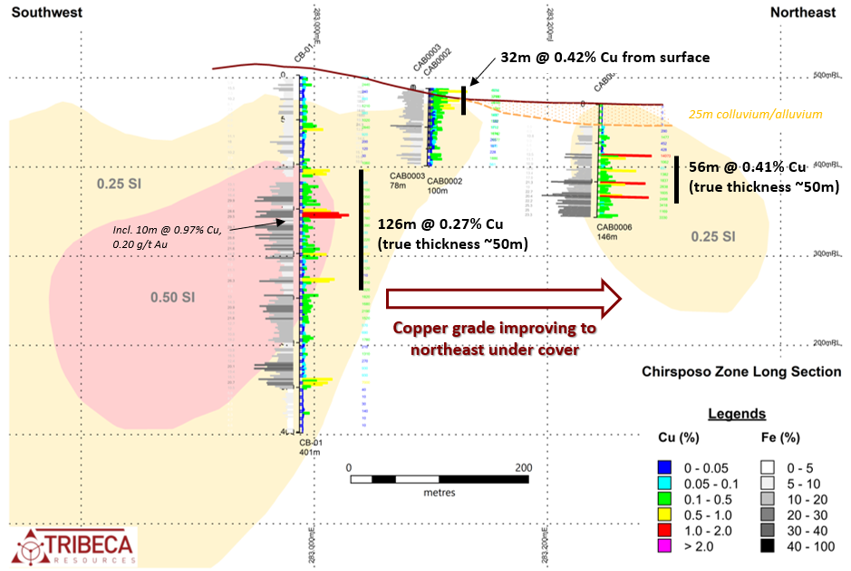 Figure 7: Long section from the Chirsposo zone, which has been intersected in three drill holes over 300m strike length and remains open at both ends and down-dip. The copper grade appears to be improving to the northeast, correlating with an iron oxide zonation from magnetite to hematite. The pale beige zones represent inverted magnetic susceptibilities of 0.25 SI units (approximately 5% magnetite) and the pale pink zones represent inverted magnetic susceptibilities of 0.50 SI (approximately 10% magnetite).

The information on this webpage is based on information reviewed by Dr. Paul Gow, Executive Director of Tribeca Resources Chile. Dr. Gow is a Member of the Australasian Institute of Mining and Metallurgy (AusIMM) and the Australian Institute of Geoscientists (AIG), and has sufficient experience which is relevant to the style of mineralisation and type of deposit under consideration and to the activity which he is undertaking to qualify as a Competent Person under the 2012 Edition of the Australasian Code for reporting of Exploration Results, Mineral Resources and Ore Reserves.