Tribeca Resources Chile SpA (“Tribeca Resources”) has completed a geochemical soil sampling program at its Caballo Blanco copper-gold-iron-cobalt project, located in the prolific Chilean Iron Oxide Copper-Gold (IOCG) Belt, approximately 40 km north of the city of La Serena in the Coquimbo province of Chile. The sampling was undertaken in November 2017, with all analytical results now received and interpreted. Specific results include:

Additional soil sampling is planned to extend the soil surveys at both Chirsposo and the SE Target to close off open +200ppm copper in soil anomalism at the southwest and western ends of the survey grids, respectively. 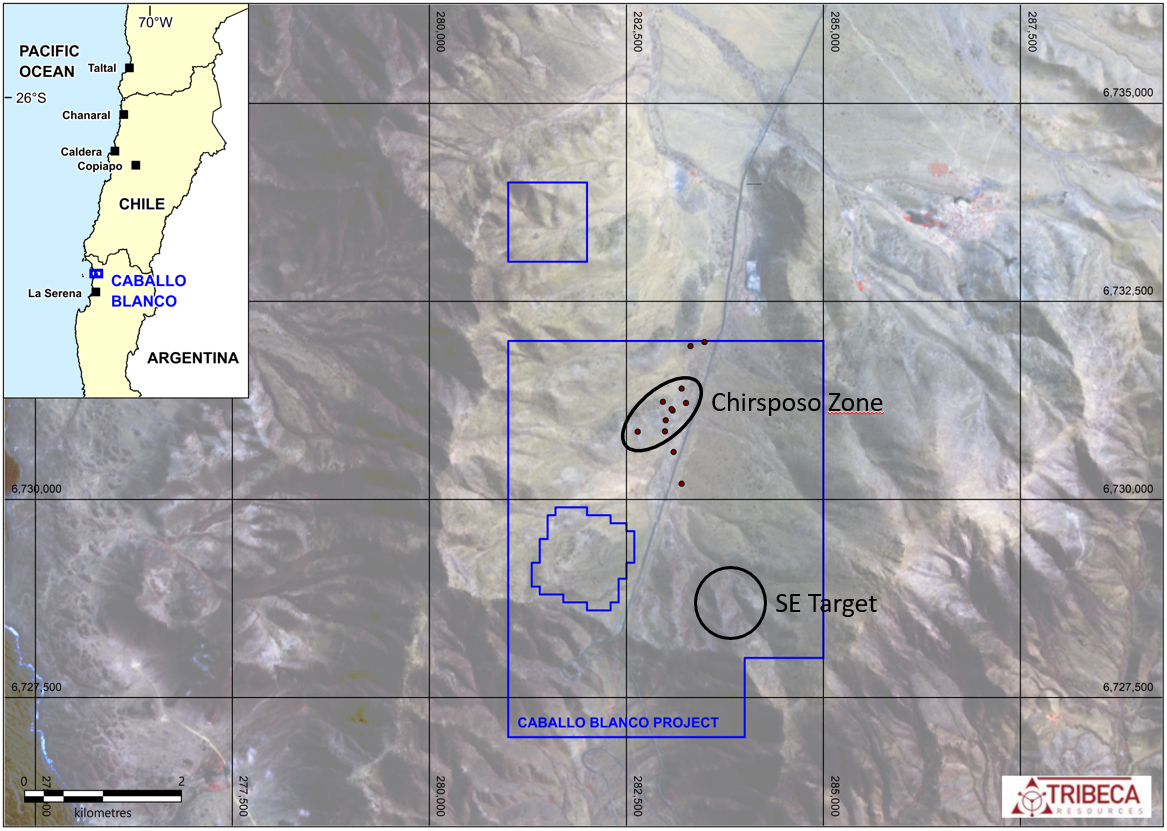 The Chirsposo zone was the subject of trenching and drilling by Latin American Copper (LAC) and Peregrine Metals Ltd in 2000 and 2009. The drill programs produced significant intersections of thick low-grade copper mineralisation, with accompanying iron±gold (Table 1). The objective of the geochemical program at the Chirsposo zone was to provide a systematic mapping of the copper anomalism beyond that observed in the trenches and drilling.

*  The intersection angle of the drill holes and the mineralised bodies is currently poorly constrained but estimated at approximately 60° for the CAB holes and 30° for the vertical hole CB-01. **Only high detection limit (<2ppm) gold analyses were undertaken during the historic RC drilling (CAB0002 & CAB0006), with all samples below detection limit.

The soil program comprised collection of -80# samples on a 100m x 25m grid. The samples were subjected to an aqua regia digest and multi-element analysis by ICP-AES. The copper results are provided in Figure 2, which shows that a zone of +200ppm copper was mapped over approximately 700m x 400m. The results outline the northeast-trending copper anomalous zones, consistent with interpretation from surface mapping. Notably the copper in soil anomalism is increasing to the northeast until it disappears under thin gravel cover of approximately 25m thickness.

The best copper drill intersection from the project to date (82m @ 0.35% Cu, 19.2% Fe from 64m) is from hole CAB0006 through the gravel cover in this northeast location. The improving copper in soil anomalism and the results of drill hole CAB0006 elevate the open northeast extension of the Chirsposo zone to a high priority drill target.

Copper anomalism is weaker on the southwest margin of the survey area, but a narrow zone of 30m width of +200pm copper in soil is open at the edge of the survey. Additional sampling is proposed for mid-year to close off this anomalism.

The copper in soil anomalism is accompanied by anomalous Co, Fe, Mo, Ni, P, and V. No gold analysis was undertaken. 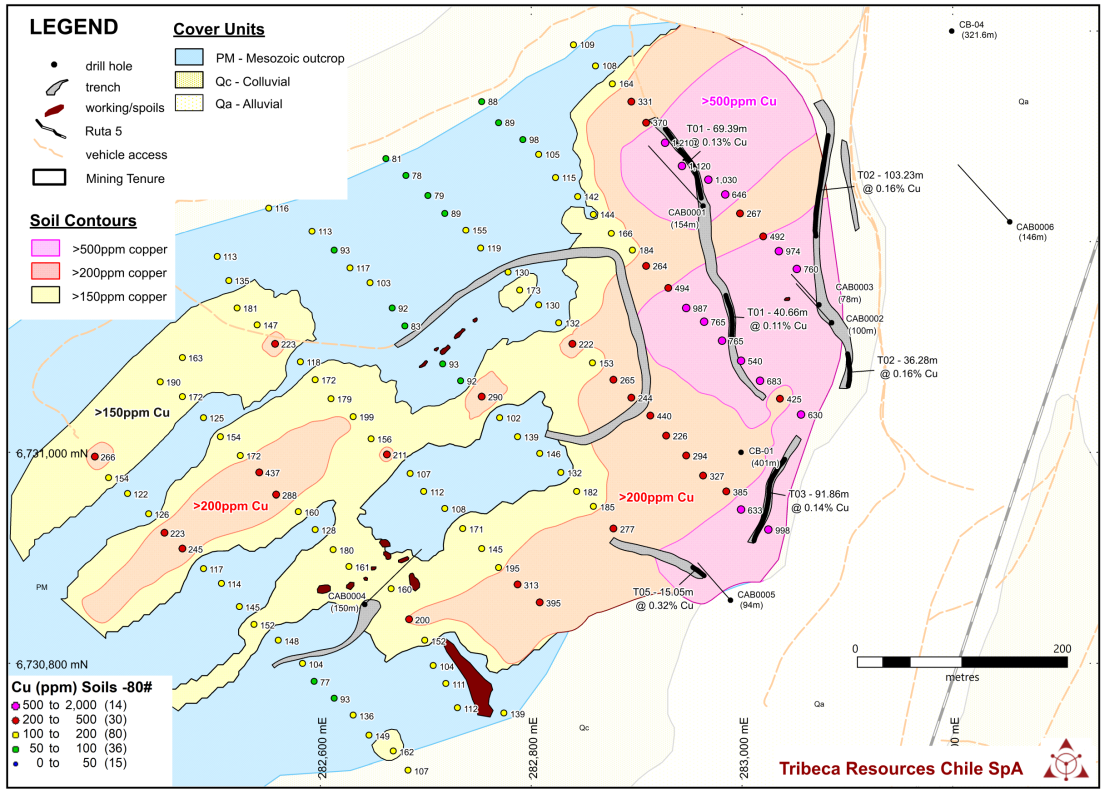 Figure 2: Plot of soil copper results from the Chirsposo Zone -80# sampling (aqua regia digest with ICP-AES analysis). The +500ppm copper anomaly at the eastern end of the survey grid disappears under alluvial cover to the northeast. Copper anomalism is consistent with the surface geology indicating an approximate northeast (050°) orientation to the mineralised shear zones.

A set of -80# soil samples were collected from an area of 800m x 1000m on a 200m x 100m grid. The copper values were subdued (typically < 100ppm) over the main magnetic anomalies, but two copper anomalous samples (maximum 405ppm Cu) were encountered on the western margin of the survey (Figure 3). Elevated cobalt in soil (maximum 58ppm) is coincident with copper at this location. Follow-up sampling to determine the extent of this anomalism is planned. 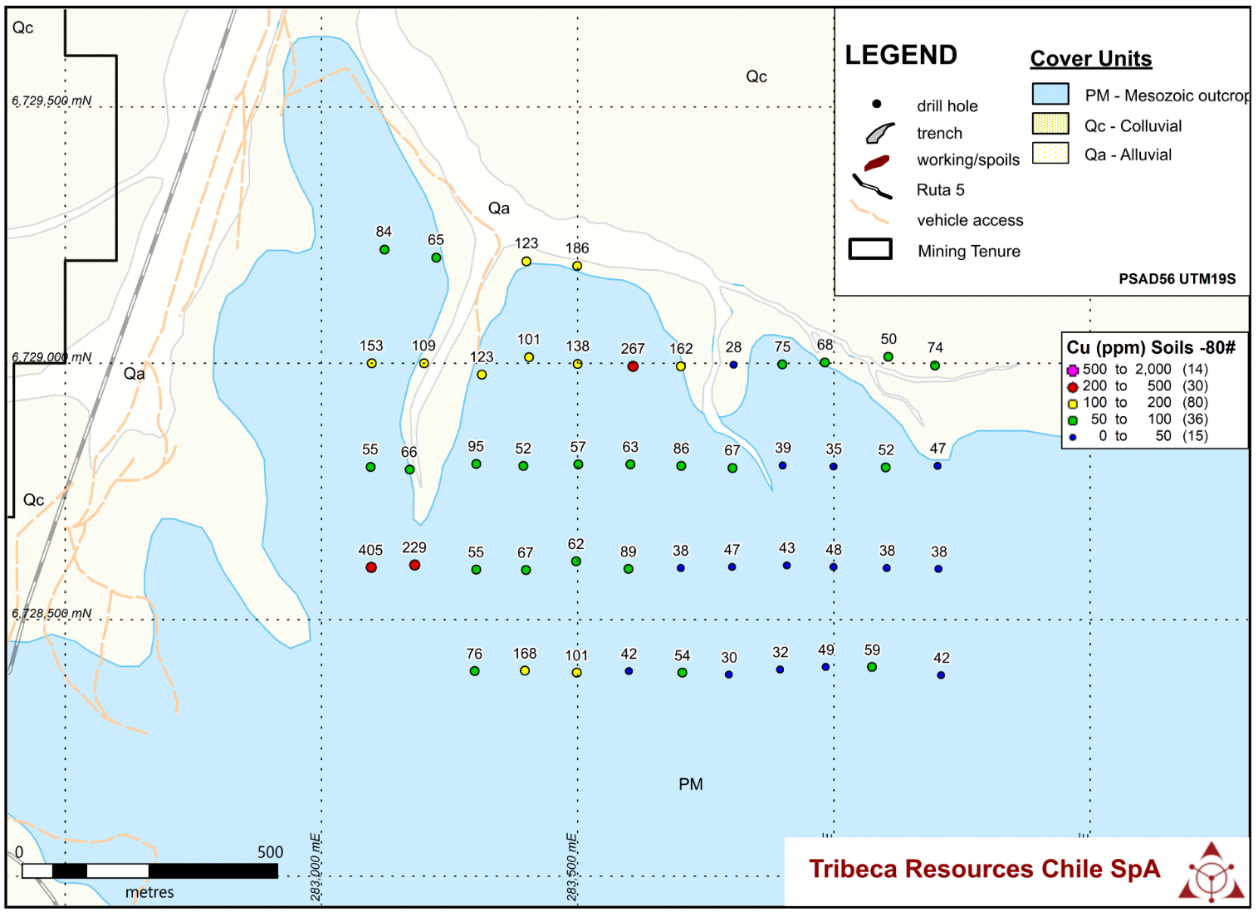 Figure 3: Copper in soil results from the SE Target ( -80# aqua regia ICP-AES analysis). The magnetic targets in the central survey area do not appear to be associated with significant copper anomalism, however there are two anomalous points on the western end of line 4728600N. 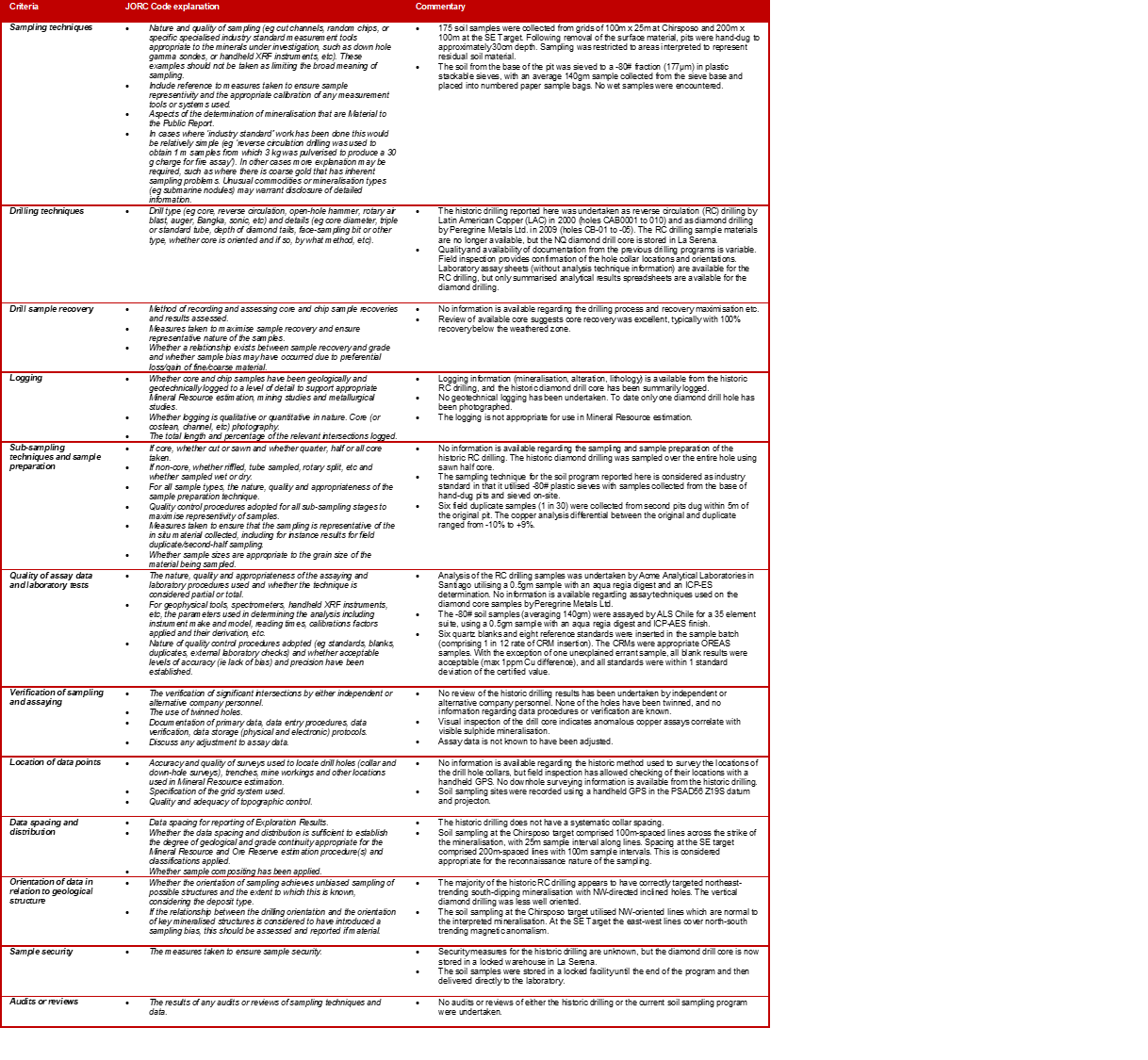 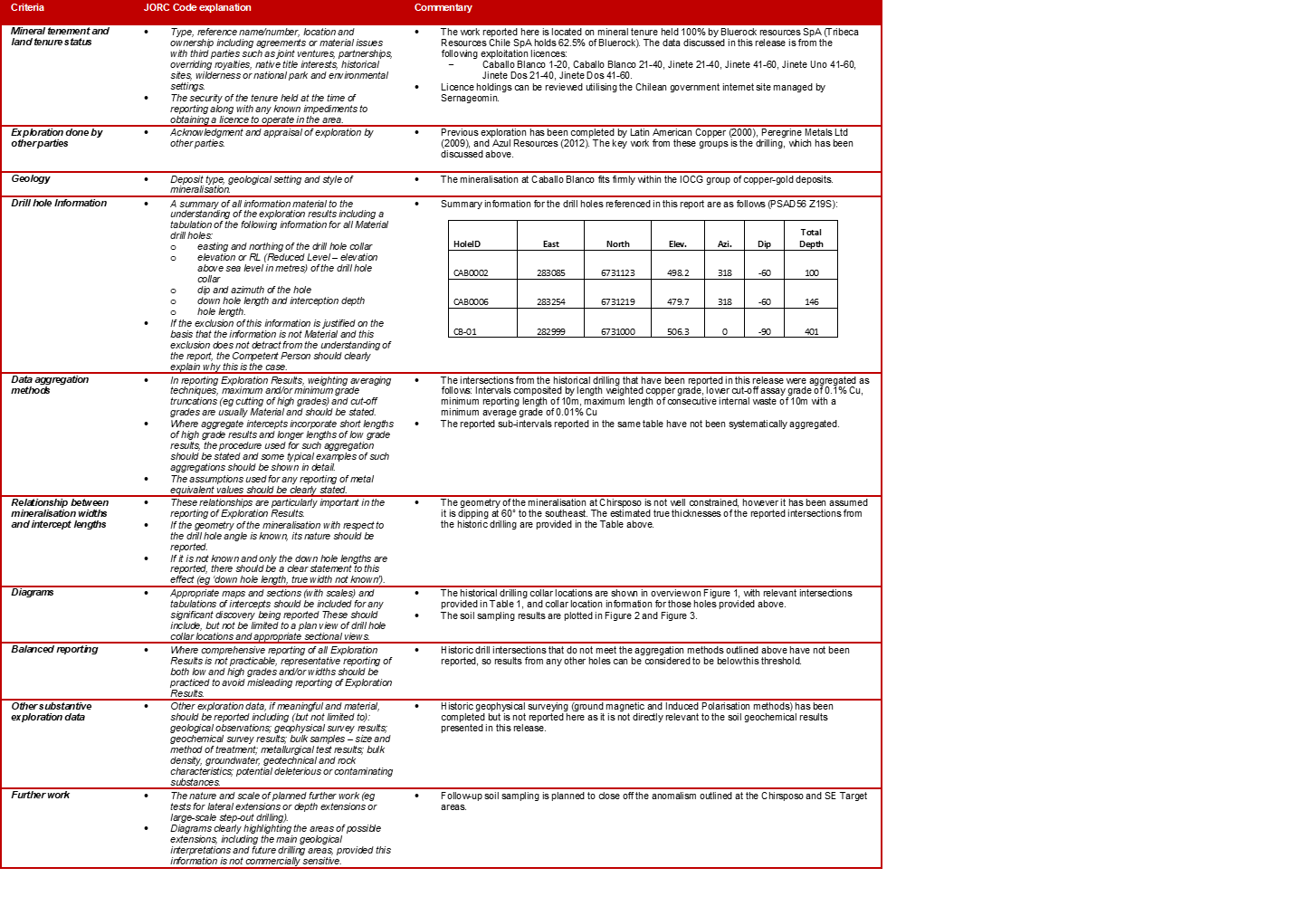