Tribeca Resources Chile SpA (“Tribeca Resources”) has recently received documentation from historic multi-element assay data, including cobalt analyses, from historic reverse circulation drilling at the Chirsposo target zone within its Chilean Caballo Blanco Project. The drilling was completed by Latin American Copper in 2000, with the new data confirming and improving on cobalt assay data from a single diamond drill hole in the Chirsposo target zone completed by Peregrine Metals Ltd in 2009. Addition of cobalt assays to the previously reported copper intersections (see news release dated 15 January 2018) provides a revised table of key copper-iron-gold-cobalt intersections as provided in Table 1. The cobalt content is not ore grade, but could provide a significant by-product credit to the potential copper-gold-iron system.

The cobalt is strongly correlated with copper and iron assays and provides additional geochemical support for the interpreted zonation of the deposit to a more hematite-rich iron oxide assemblage, with better copper-iron-cobalt grades, toward the gravel covered northeast extensions of the mineralised system.

*  The intersection angle of the drill holes and the mineralised bodies is currently poorly constrained but estimated at approximately 60° for the CAB holes and 30° for the vertical hole CB-01. The lower detection limit for gold in the assaying of the 2000 LAC RC drilling (CAB0002 and CAB0006) was 2ppm.

The Chirsposo zone was the object of trenching and drilling by Latin American Copper (LAC) and Peregrine in 2000 and 2009. The drill programs produced significant intersections of thick low-grade copper mineralisation, with accompanying iron±cobalt±gold. Tribeca Resources has recently acquired copies of the original hardcopy laboratory assay sheets and compiled the multi-element data. 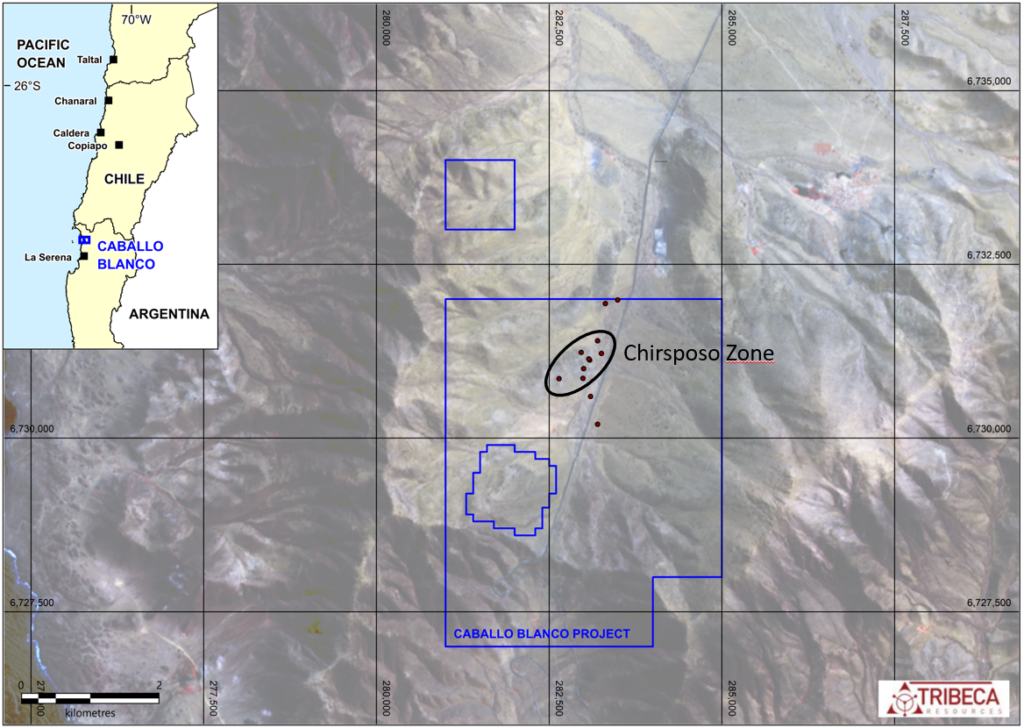 The presence of elevated cobalt assays from the drilling, broadly coincident with the iron and copper mineralisation, is consistent with the strong cobalt anomalism evident in surface geochemical data (soil analyses) collected in 2017 (see Tribeca news release dated 15 January 2018) which returned a maximum cobalt in soil value of 97 ppm cobalt. The cobalt in soil anomalism strongly correlates with anomalous Cu, Fe, Mo, Ni, P, and V. No gold analysis was undertaken on the soil samples. 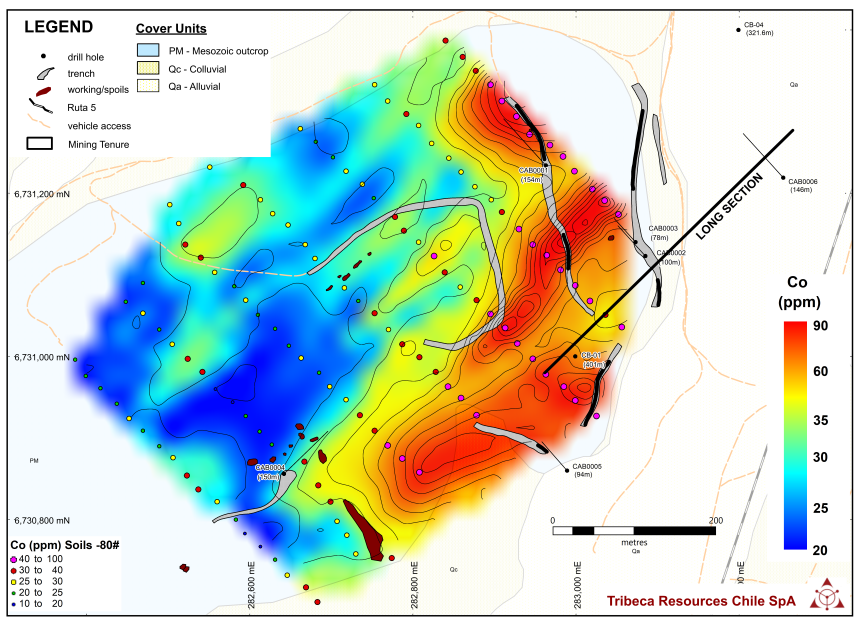 Figure 2: Plot of soil cobalt results from the Chirsposo Zone -80# sampling (aqua regia digest with ICP-AES analysis). The cobalt anomalism at the eastern end of the survey grid disappears under alluvial cover to the northeast. The strongly northeast-trending cobalt anomalism is consistent with the surface geology indicating an approximate northeast (050°) orientation to the mineralised shear zones. The cobalt in soil contour lines are 5 ppm intervals. The location of the long section from Figure 3 is shown on the diagram.

Review of the drill data indicates the cobalt mineralisation is improving along strike to the northeast (Figure 3), in line with improved copper and iron grades. Review of the ground magnetic data inversion suggests the improving grades correlate with a zonation of iron oxide from magnetite to hematite. The best copper-iron-cobalt intersection, comprising 82m @ 0.35% Cu, 19.2% Fe, 576ppm Co from 64m in CAB0006, is located under thin (25m) gravel cover off the northeast end of the outcropping mineralised alteration system (Figure 2 and Figure 3). Unfortunately, the RC sample material from the 2000 drilling is no longer available so the mineralogy and mode of occurrence of the cobalt is unknown.

This additional cobalt drill data adds to the prioritization as a drill target of the shallow gravel covered areas that remain open to the northeast of the mineralisation known from drilling to date. 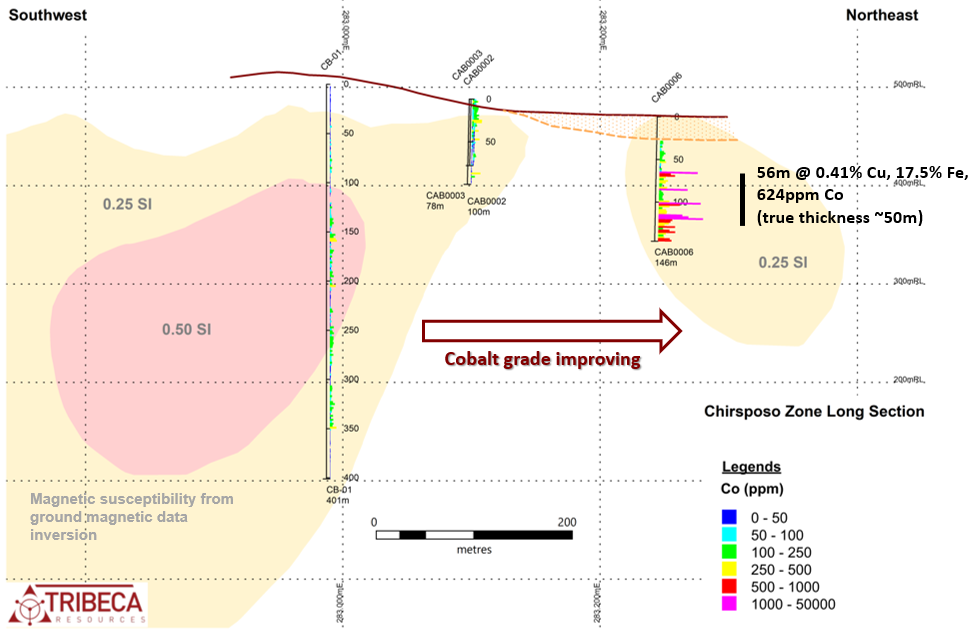 Figure 3: Long section from the Chirsposo target zone, highlighting the strong increase in cobalt mineralisation towards the northeast, where hole CAB0006 tested below the thin (25m) gravel cover. The increase in copper-iron-cobalt grades towards the northeast correlates with an iron oxide zonation from magnetite to hematite, evident from the inversion of the ground magnetic data. The pale beige zones represent inverted magnetic susceptibilities of 0.25 SI units (approximately 5% magnetite) and the pale pink zones represent inverted magnetic susceptibilities of 0.50 SI (approximately 10% magnetite). 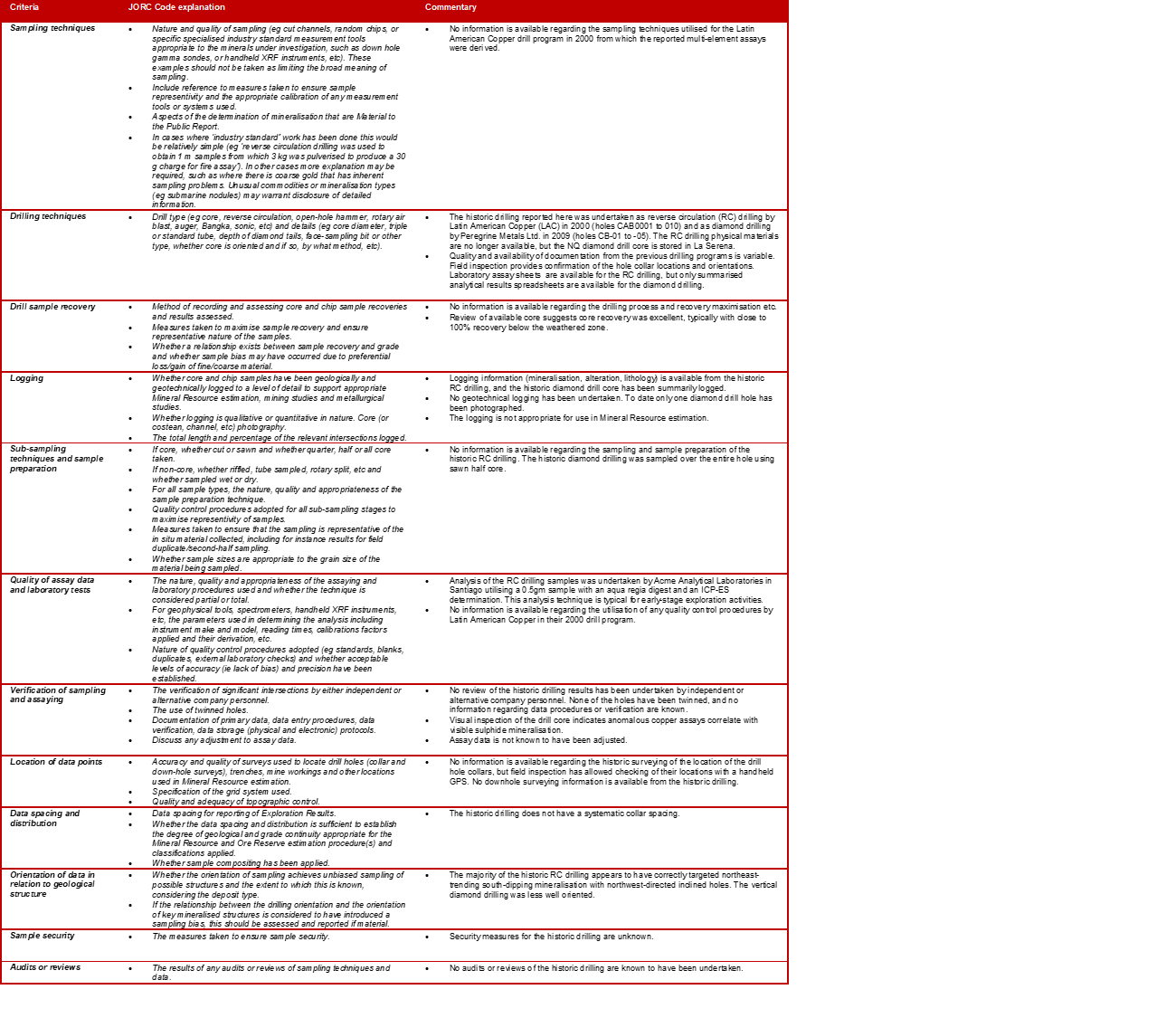 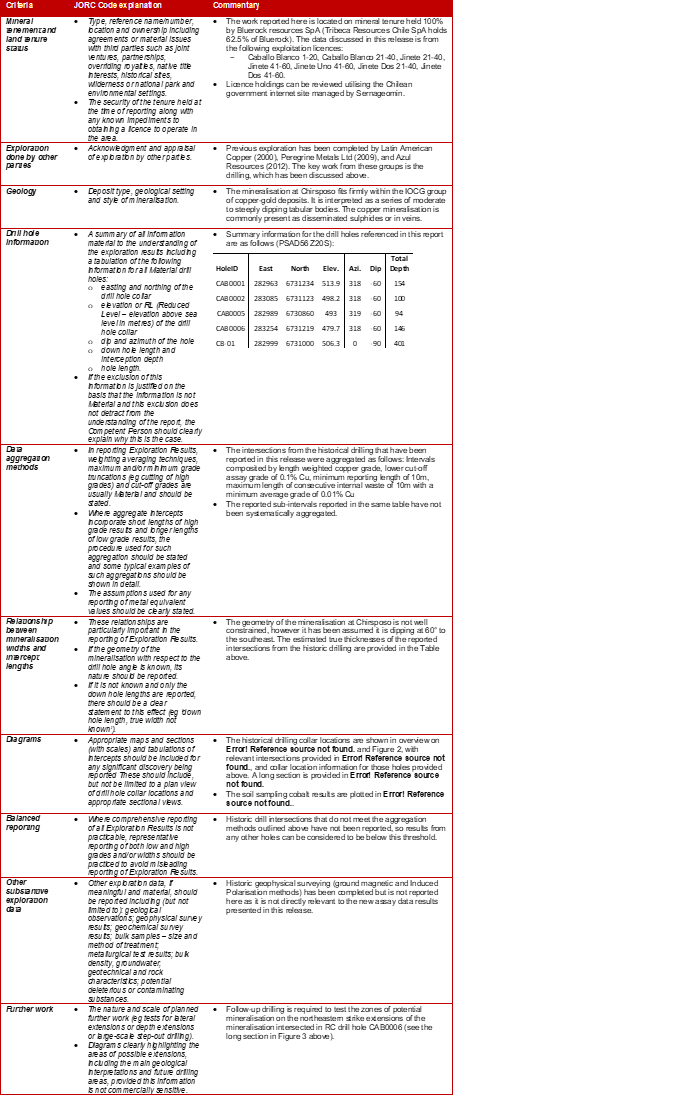